We all met, years ago, working at a local brewery in Kill Devil Hills and became fast friends over our shared love for good beer and rum. Over the course of many sessions spent sipping rum and talking shop, we came to the conclusion that starting a craft distillery on the Outer Banks made a lot of sense. Two members of the company, Adam Ball and Kelly Bray, worked at the area’s local breweries for many years. Our other two members, Matt Newsome and Scott Smith, have over 20 years of bar tending experience on the Outer Banks between them.

Over the past few years we have attended multiple courses on the art of distilling, including classes at Michigan State University as well as a class put on by the manufactures of our still. From these classes we have discovered the similarities and differences between distilling and brewing beer. Out of all the spirits that can be distilled, we have come to the conclusion rum is a former brewer’s dream, because of the incredible variety of rum that can be produced, white, gold, spiced and aged rums just to name a few. We have also attempted to sample as many rums as we can get our hands on, from the Caribbean, to new US craft distilleries to rum as far away as Fiji.

In our search for a location to make our plan a reality, we discovered the perfect place, a historic building in downtown Manteo. As two of us are Manteo High School alumni, the town was a perfect fit. As three of the four partners are residents of Kill Devil Hills, we figured Kill Devil was a good name for the rum. With support from the town we took the necessary steps to starting a craft distillery. The site we chose is an historic brick building on Budleigh St. built in 1946. Over the years the site has been home to Twiford Furniture, Davis Department Store and finally the Dare County Board of Education which left in 2004. The only large change to the building will be the addition of a concrete floor for the distilling area. The building turned out to be better than expected with a beautiful pine floor and stout cypress beams that will make perfect barrel racks. Expect to see big things in coming months as we turn our dream into reality. The Outer Banks is steeped in rum history and pirate legend, and we want to keep this spirit alive! 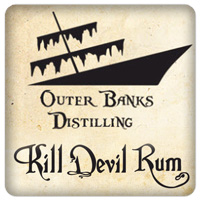