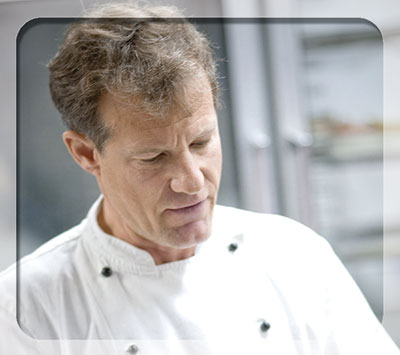 A lifelong Outer Banker and graduate of Manteo High School on Roanoke Island, Lee is a graduate of the Culinary Institute of America in Hyde Park, NY, and served as a culinary apprentice instructor at the Trellis Restaurant in Williamsburg, VA.

As an experienced fisherman and Roanoke Island native, Chef Lee knows the local fisherman and Wanchese docks, the insight into purchasing fresh seafood.

Chef Lee introduced the cooking class “Cooking with Penguins” (for the restaurant’s previous identity as Penguin Isle) the summer of 2008. The classes were successful and much sought after. Chef Lee was a short-term mentor for several aspiring chefs who attended the classes. For 2010 Chef Lee has enhanced the class from a shellfish menu to one with four distinct entrees and cooking techniques.

In 2010, Penguin Isle transformed from a fine dining venue to a waterfront venue with Chef Lee’s menu mastery. Chef Lee created three menus (casual, bar, and children’s) for the captain of The Pamlico Pearl, the pirate ship “moored” alongside the Hideaway. A multiple award winner of Taste of the Beach, Chef Lee has served family generations, numerous brides, and thousands of vacationers in his 20+ year career on the Outer Banks.